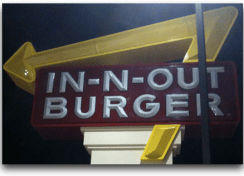 What would you camp out overnight for?

This was the question posed by Casey Scott from Channel 2 (KUTV), Salt Lake City on the 6AM news on Thursday, November 19th, 2009. Casey asked this to the morning viewers as well as the dozen of us who had just spent the evening in tents and sleeping bags in front of the newly opened In ‘N Out Burger in Draper, Utah.

So, what got us to this day?

As Kristina and I were getting ready to move to the 801 (Salt Lake City), I began connecting with some of the locals who were tied into social media. I followed people on Twitter and subscribed to a handful of blogs. One of those blogs was Adventures in Entrepreneurship, by Jeremy Hanks. Jeremy is the founder of Doba and a pretty cool dude. He was my guest on Blue Sky Factory TV (#BSFTV) back in July (Episode #17). But more important that any of that stuff is what Jeremy blogged about on February 12, 2009. The title of the post was I’ve lived about 12,500 days. Greatest one? Today! In this post, Jeremy highlighted the Salt Lake Tribune’s announcement of In ‘N Out Burger opening up their first store in the state of Utah – Draper, to be specific.

Jeremy and I connected a bit in the comments of this post. We discussed our mutual love for the best burger in the world – one that would be coming to Utah…soon. Jeremy called the good folks at In ‘N Out about a dozen times. They would not commit to anything. Finally, a week before opening, he received a “99% certain we’ll be opening on Thursday” response. We planned our campout and the rest is history.

Below is a video-pictorial of the events as they unfolded. Enjoy.

If you are having trouble viewing, try blip.tv.

The Best Day Of My Life

Well, I certainly had fun. It was a once-in-a-lifetime experience. The best day of my life? Well, that may be a stretch. However, I did learn a ton more about what makes In ‘N Out Burger such an incredible company.

So, again, while this was not the best day of my life, we certainly had fun. We came. We camped out. We were interviewed. We ate. We returned. We ate again. Did I say we camped out?

What would you camp out overnight for?